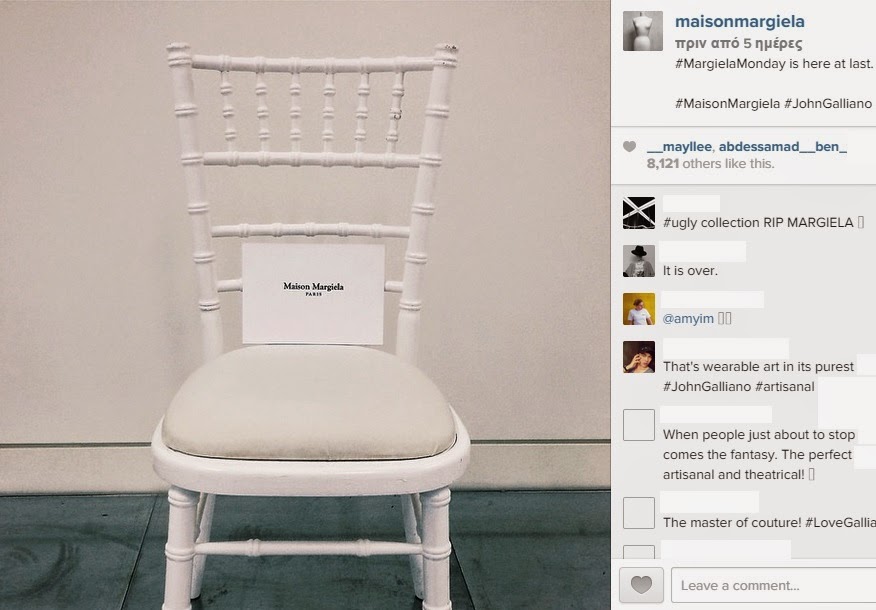 The reviewing diary of a new era.


I cannot remember myself admiring Galliano - I remember his mustache though, it was on TV. I was too young , barely born when his shows used to shake the earth underneath the Ford designed Gucci heels of the late 1990s - early 2000s fashion crowd. British, mid-class, high-talent case. A limitless McQueen in my eyes. He smudged drama off the template of fashion, changing everything along with Dior. The Madonna of designers, he became a superstar, brighter than the house he designed for. His domination was relentless, unforgettable, certainly undeniable. And even though many dislike or even feel repulsed by the what now might seem ultra-over-the-top-crossing-the-line designs and the tacky yet sold-out dior bags, there is not much one can tell about Galliano, besides the fact that he is indeed the last living couturier.


What happened a few years ago, the reason he was more or less kicked out from Dior and his own house, was a travesty in the name of ethics. Of course fashion should by all means promote democracy, kindness etcetera etcetera, but then again Chanel used to ficken a German or something herself.


Leaving all of the drama aside, a five-years-long break was needed. Having someone else design for his name, still is not. Yet he got through it, seemingly fine, worked a season for Oscar Della Renta, no one cared, and finally got picked up by Maison Martin Margiela.


The news broke the internet. The game was on, and I could almost faint thinking of the pressure a designer of his extent must feel when the whole galaxy, all twelve gods of greek mythology, amun ra, and jesus christ, expected the supreme, the uber, the wedding-cake of a "John loves Martin" marriage so odd, it almost felt right.

When the pictures came in, and I guess I'm not the only one, I felt weird. I couldn't understand what I was seeing, if it was the show, or a warm-up. Is it really Galliano. What is going on? I bet style.com
had a million servers on or something to withstand the visits of the live coverage. I kindly offered myself three to four hours to let the collection sink in. A week to even try and write about it. I watched SHOWstudio 's live discussion panel twice, quite a little number in comparison to the +100 times I watched the pictures of the show. For the first time in my nineteen years long life I felt like I could never do what I was witnessing. Never. Not because it didn't fit me but because I couldn't do it. No one is capable of such magic, artistry, perception of aesthetics. The styling, the heads and the toes. Stephen Jones is a god. But Galliano. He is the real deal.


I wasn't shocked the way he used to want to shock half a decade ago. It was a reverse-psychology shocking attempt. A successful one. At the end of the show, after the 3D arcimboldo masks, and twisted tailored suits, jean shorts, impeccable dresses, genius painted mini-cars and tons of golden trinkets, reassembling dead kings' adornations of times gone by walked the runway in black and transparent tights, the toiles came out of the closet. At the end of the show, you couldn't applaud in front of the clothes. You could applaud in front of their progress. Their canvases. The evolution. An evolution that suits the house of Margiela to the fullest. A personal revolution of a much different Galliano that instead of walking down the runway, stood still. Solid. He and his vision, full-blown and mature.

If there is something that this season was deconstructed over at Margiela - along with the name - that certainly is John, and the result is of Artisanal extent, for he is the art of couture in flesh and bones