CR Washes Over All with Love! 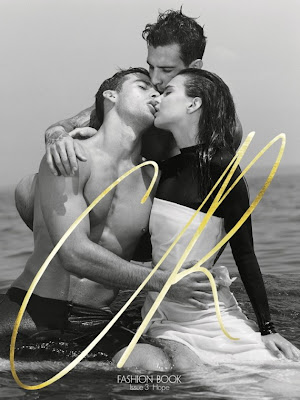 The 3rd issue of the CR book is out and there is no chance that you haven't heard or seen something about Kim Kardashian's pregnancy poses for one of the books covers. And while that I'll comment in my next post, I would like to talk about the j'adore, in my opinion always, second cover and story called "Love Washes Over All". Inspired by Roby Thicky's "Blurred Lines" song and video, Carine Roitfeld, ever a genius decided to go all the way, blurring the sexual lines for an editorial that is far more controversial than anything we spot right now in the ever increasing boring press.

To talk credits, the shooting included Blurred Lines' own star, model Emily Ratajkowski, a huge amount of "wet-ed" testosterone, Karlie Kloss and a lot of cross-homosexual action. Shot by the Abercrombie & Fitch catalogue photographer Bruce Weber, lust was the goal, but was it really just it?

The answer is simple. First of all, Carine, the owner of this controversial book, left her position as the editor-in-chief of Vogue Paris in search for creative freedom. She decided to focus her inspirations and experience in her own book, in which she wouldn't have to talk numbers, wouldn't have to promote certain designers, but go with her instincts, her friends and fashion companions, and rather than create commercial driven imagery for mass consumption, create some art instead. Truth is, that this she couldn't do in French Vogue, and if you ask me it's a good thing she left for good. You see, twice that eroticism happens right now in Vogue Paris, with Emanuelle Alt turning the magazine into a full on porno. Boobs everywhere is the new black, but that is not acceptable for a magazine that has a certain identity. Roitfeld's own book though, underlines its identity in every single issue, and what is acceptable and not is up to her to decide.

Ingeniously, the theme questions another huge social fact of our times. The gays. Homosexual marriage in France was permitted by law earlier this year and the buzz was all over the place about homosexual men and women getting married and forming families of their own. And then it was in America that an anti-homosexual law was rejected and the list goes on and on. For the industry though, being gay is like drinking Starbucks. Mostly expected, and everything cool about it. So rather than fight for equal rights, I see this photo shoot as an innuendo, that this kind of sexuality is far from scandalous, and is actually normal and every one's OK with it.

In 2013 though, that seems to be for most, shocking! but it's there. And it will be there.. and probably it will repeat itself. You see fashion comes in your face, always. You might feel insulted and shocked at first, just like when Schiaparelli introduced zippers in her designs, but time will come and just like the zippers, you will find blurring the lines to be as essential as it is ordinary!