What's with the mass? 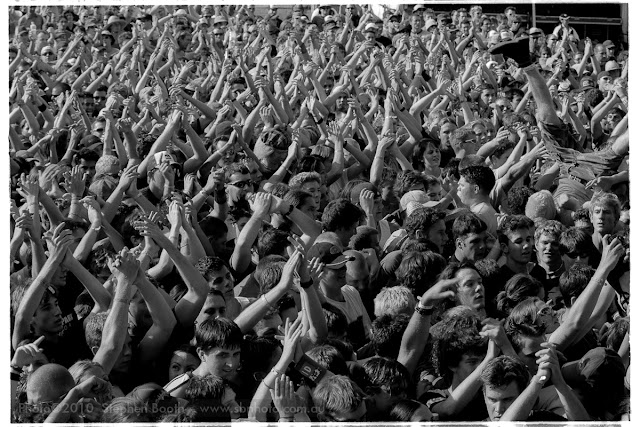 I first came up with this idea on an extent that I could write about it this past Monday when I went to Lana Del Rey's live concert here in Greece. What's with the masses really? When I got through the security thing I entered a huge area consisted of two different groups. The punk/rock kind of rebels of all ages that were there for Iced Earth etc and the hipsters which adore Lana and skip everything else with a god-given arrogance. The "rockers"were all dressed in black.Grunge references, a beer and a joint of course and this look on their face saying that everything is meaningless so let's go drink the hell out of ourselves in a basement and die like rats. On the other hand the more reserved hipsters had this Lana-ish look. High-waisted denim shorts, some flowers on top of their head for the girls and then boys, oh boys, they all looked exactly the same. A fringe and shaved sides must go with huge glasses, denim shirts, colorful bottoms and a huge leather bag which they don't really need.


So let's say that the 90s revisited hipsters are 2010s new black, like the mods for the 60s, and the punks for the late 70s.. why do we all, at some point, get mixed with the mass and never think of having our own personal style that is instead timeless and oversees trends and passing fashions? Is it security that we seek or we simply love what's new and trendy and go for it anyways? Six years ago I went through this mass state of mind. What I realized is that people have a tendency to scream their differences in a wearable way. What is false here is that these differences address to groups rather than individuals. So in the end the only difference you make by dressing up in a certain way, with a certain look, is  become a part of a smaller group consisted of the same people. If you get there it's harder to move on to becoming a totally uninfluenced individual who promotes single identity to a group one but it certainly is not impossible.


Music and fashion are one, and liberty
of choice is the essence and charm of both. A look is linked to each genre of music that works as a fuel for fashionistas and the industry, and without those looks life wouldn't be so interesting. But I would be lying if I said that I don't feel bad for those who go with the masses, not only stylewise but also when it comes to their very philosophy. You see, I see God through Diane Pernet, Daphne Guinness, Cathrine Baba, and of course the unforgettable Isabella Blow, because it takes courage to dress like a punk, but it takes a lot more guts to stand alone, different,between the masses.
Leo
Newer Post Older Post