The history of sunbathing* 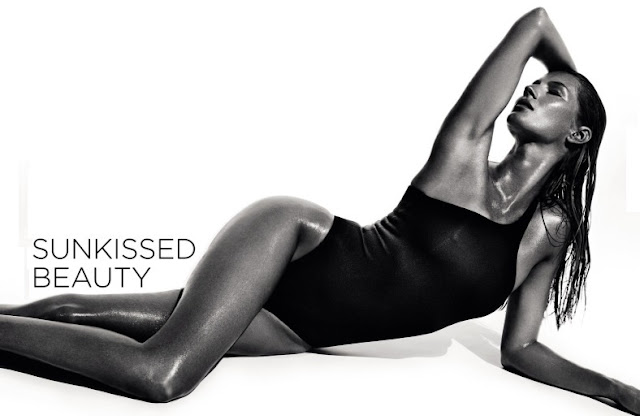 Sunbathing is old news and the craze for a tanned complexion begun about a hundred years ago in the roaring 20s. And while having a dark, sunkissed body remains a must since then, before that sun used to work as a noblemen repeller. To high society, exposure to the sun was directly linked to outdoor chores and labor work, meaning the upper class had to remain as pale as Stoker's vampires, walking around with an umbrella on top of all the layers of fabrics and enormous hats covering them entirely.
As the years went by, a fashion for swimming arouse and scientists encouraged exposure to sunlight for its therapeutic properties (concerning the release of vitamin D by the skin when exposed to sunlight). On top of that, the always trendsetting Gabrielle Chanel started sporting a rich tan combined with lux beachwear, a look highly desired from then on. Fashion followed course and designers focused on swimwear. Among them were Jean Patou, Sonia Delaunay and Elsa Schiaparelli, who emphasised on finding the perfect colors to much and emphasize a great tan, along with inventing eye-catching designs. Halter-neck swimsuits were the ultimate trend of the 30s, which allowed more area to be tanned and later on showcased underneath a Vionnet bias cut dress with an open back. 1946 and Louis Reard invents the bikini. Scandalous at first but by the mid 50s the two piece swimsuit craze was obvious. And for the nudists, let me just say that your mentor listens to one and totally iconic name: Brigitte Bardot! who sunbathed topless in 1960's Saint-Tropez causing a scandal and a crave for boob-freedom at the beach. Rudi Gernreich introduced the mono-kini, modelled by Peggy Moffit in 1962 and launched in 1964 for public use, making topless sunbathing a fashionable choice. But what was known as a sun-cure no longer exists as a term at all, with doctors screaming about the ageing and skin-cancer causing misfortunes of sun-rays, especially with the catastrophic depletion of the ozon layer mounting year after year. Sun-screen is now of crucial importance and artificial ways of having a great tan are favored, with solarium (use of UV lights to produce a tan in no-time) being the leading method (though argues issue that it does not differ that much from regular sunlight) followed by tanning make-up sets, also known as bronzers.

Sunkissed beauty has it's own history, and it's future is for the time being predicted bright as the sun itself.