Daphne Guinness, not only a style Icon 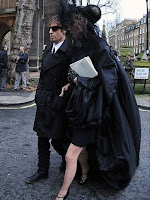 Daphne Guiness, heir of Arthur Guiness , the founder of the well known Guiness beer company that still exists since 1759, is for sure one of the most extravagant style icons of the century. Blessed with a highly distinctive sense of style and a mythic legacy, she managed to set herself as a muse, model and style affective person towards the fashion industry, with her closet being one of the most tremendous closets ever existed, as she herself is also a collector. Apart from being named in the Tatler's top 10 best-dressed list in 2010 and included on the list of International Best Dressed Hall of Fame for 28 years in a row, being a creative spirit she cannot just be the icon that she is. She created her own make-up line for MAC cosmetics in 2011, and she also creates clothes, jewelry and perfumes for herself, along with a few object inventions all driven by her adoration for armor. Legendary designers such as Karl Lagerfeld, Philip Treacy and Alexander McQueen are some of the most important figures of the industry that expressed adoration and got inspired from Daphne, with the latter being one of her closest friend. When Lee died, she was devastated, as you could say there was something really special between those two innovative artists. David LaChappele is a close friend of Daphne's as well and a longtime collaborator. I am pretty sure someone could tell that her style somehow matches Lady Gaga's and that is because as Gaga claimed, Daphne Guiness was one of the women that defined her style and made her who she is. Finally it is to be mentioned that she has participated in several charities in order to help women and their rights and people who suffer from mental illinesses. Personally I find her presence brilliant!!! Her style and aura will inspire me forever and I will always honor her for being so unique and classy yet in a very avant guard way, preserving the balance between her Name and the Art of her own spirit.

Here are some of Daphne's Guinness fashion appearances.